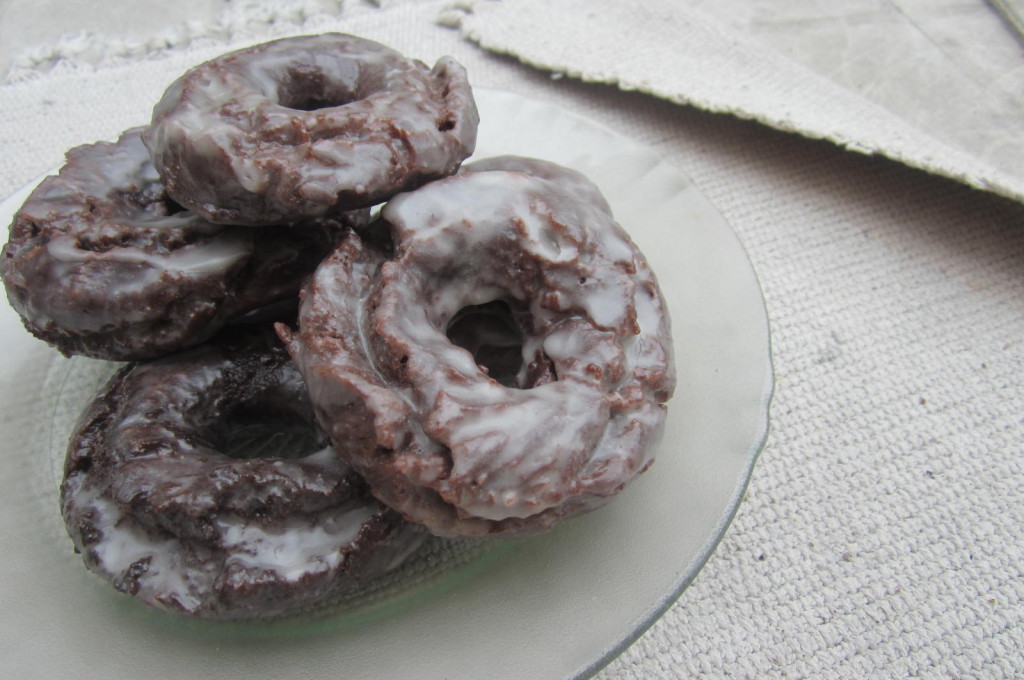 I don’t know if you’d heard, but I love donuts. I normally make baked ones, to cut on the calories, and also because they’re easier. But I also like to make (and eat) some indulgent fried donuts once in a while (well, who doesn’t?).

I get most of my recipes for fried donuts from the Top Pot cookbook. It has lots of varieties for both cake and raised donuts. And the cover is squishy :) 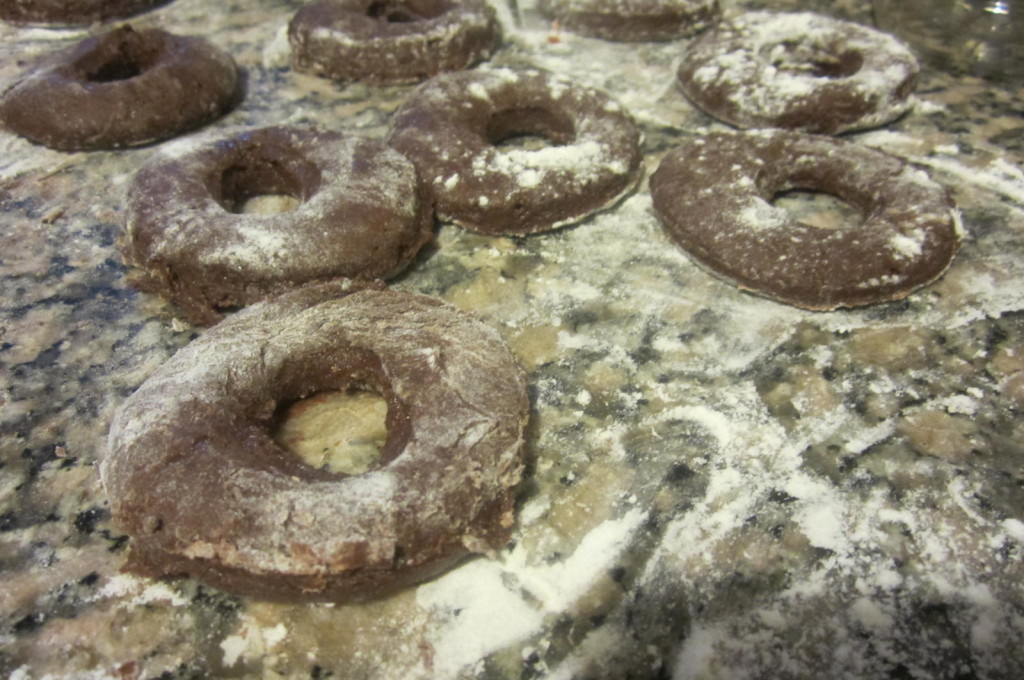 This time I wanted to try the old fashioned donuts, cause they looked sooo good. Plus I don’t think I had ever tried one before (we pretty much have just 2 types of donuts around here), so I was curious to give them a try.

Flavor-wise, chocolate glazed is one of my favorite donuts, so I went with that one. 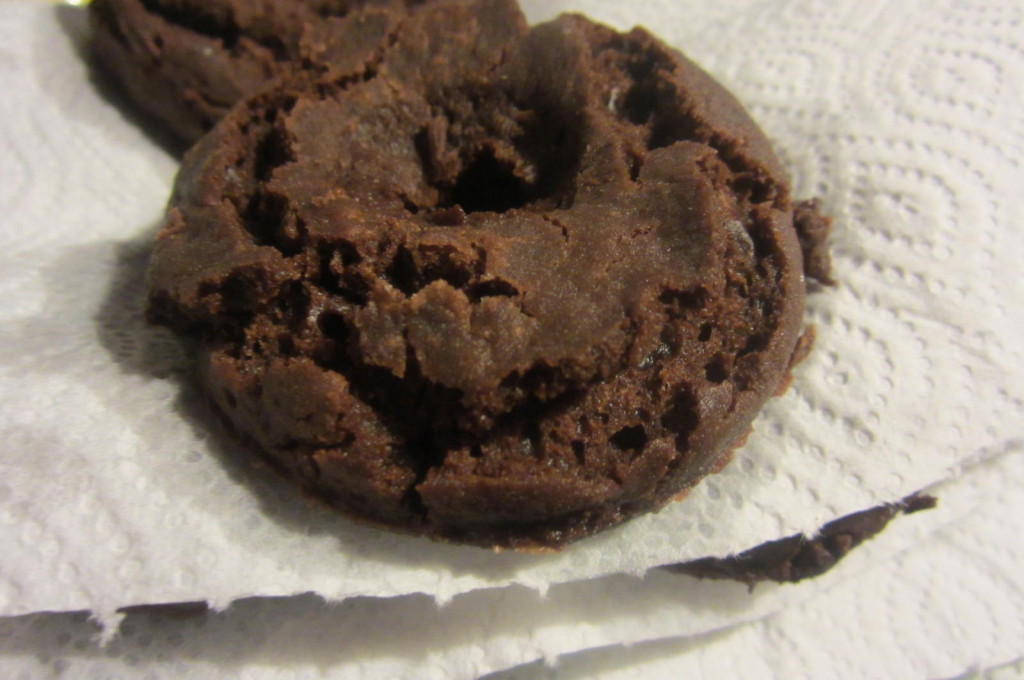 Look at those lovely creases!

They turned out so good and so pretty as well! One of the qualities of the old-fashioned donut is that they hold more icing because of their cracks, so they keep better than regular donuts. And I found that they actually tasted better on the next day! Though there was only one leftover donut D: (can you believe that I only ate 2 total? My friends and family are such gluttons).

They only con about these, I think, is that the chocolate glazed is a donut that holds up great to baking, so I’m not sure these are worth the extra calories. Though this old-fashioned version is definitely a lot of fun to make! 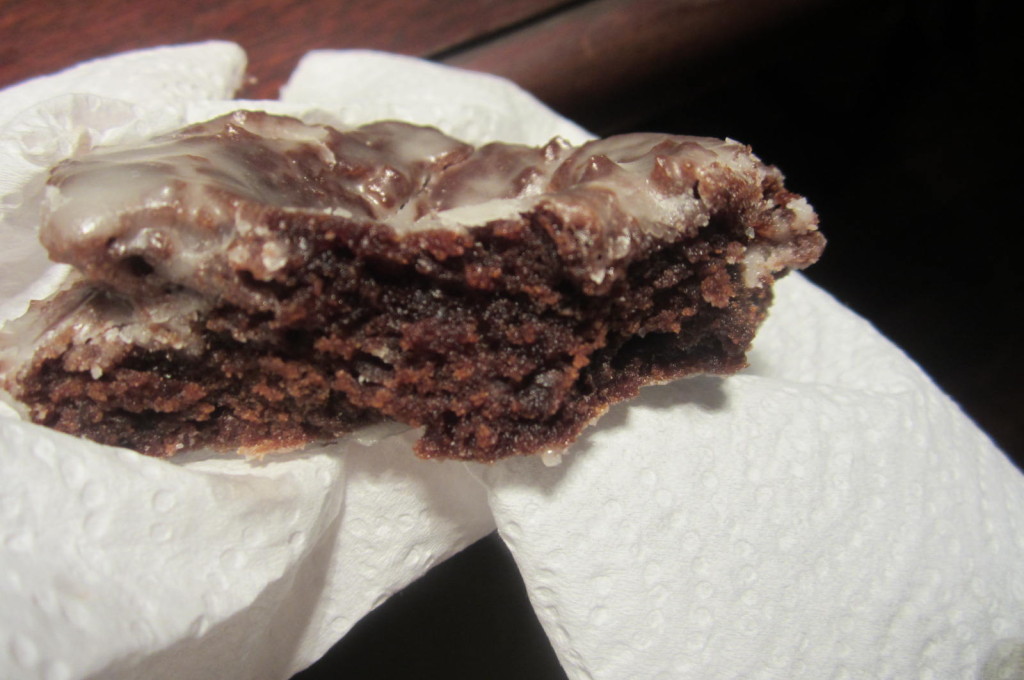 Recipe by Top Pot Hand-Forged Doughnuts
Yield: 12 doughnuts and holes, or about 14 doughnuts

1. Sift the flour, cocoa powder, baking powder, salt, and nutmeg together into a medium bowl, and set aside.
2. In a stand mixer fitted with the paddle attachment, mix the sugar and shortening for 1 minute on low speed, until sandy. Add the egg yolks, then mix for 1 more minute on medium speed, scraping the sides of the bowl with a rubber spatula if necessary, until the mixture is light colored and thick.
3. Add the dry ingredients to the wet ingredients in three separate additions, alternating with the sour cream, mixing until just combined on low speed and scraping the sides of the bowl each time. The dough will be sticky, like cookie/biscuit dough.
3. Transfer the dough to a clean bowl and refrigerate, covered with plastic wrap/cling film, for 45 minutes (or up to 24 hours).
4. Using a candy thermometer to measure the temperature, heat oil (at least 2 in/5 cm deep) in a deep fryer, large pot, or high-sided frying pan to 325°F/165°C. Roll out the chilled dough on a generously floured counter or cutting board to 1/2 in/12 mm thick, or about 8 in/20 cm in diameter, flouring the top of the dough and the rolling pin as necessary to prevent sticking. Cut into as many doughnuts and holes as possible, dipping the cutter into flour before each cut. Fold and gently re-roll the dough to make extra holes (working with floured hands makes the dough less sticky), and cut again.
5. Shake any excess flour off the doughnuts before carefully adding them to the hot oil a few at a time, taking care not to crowd them. Once the doughnuts float, fry for 15 seconds, then gently flip them. Fry for 75 to 90 seconds, until cracked, then flip and fry the first side again for 60 to 75 seconds. Transfer to a rack set over paper towels/absorbent paper.

1. Place the icing sugar, corn syrup, salt, vanilla and hot water in a large mixing bowl or in the work bowl of a stand mixer fitted with a paddle attachment. Using a whisk, or with the machine on low, blend until the mixture is smooth and all of the sugar has been incorporated, scraping the sides of the bowl with a rubber spatula if necessary. If the glaze seems too thick, add more water, a teaspoon at a time.
2. To glaze, dip one side of each hot doughnut into the warm glaze, and let dry for 10 to 15 seconds before serving (I dipped both sides).