Guess what guys! The blog is turning 2 today :) Not an official birthday since I don’t really know the day I started the blog, but my first post dates from March 28th 2012.

I wasn’t active this time last year so I didn’t get to do an anniversary post. But this year I’m in full swing so we’re celebrating, cake batter marshmallow style! 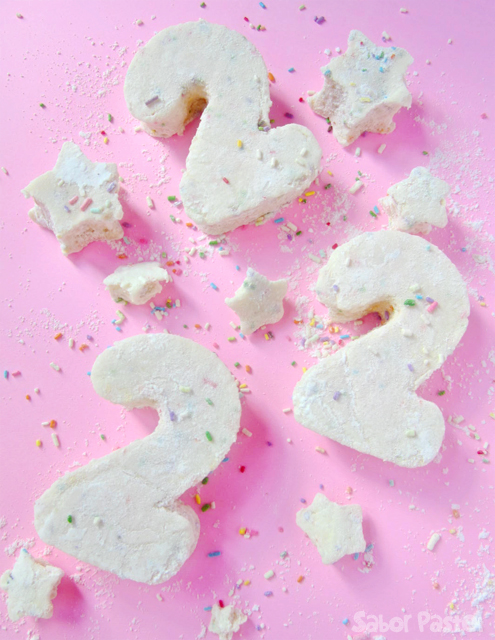 I wasn’t sure what to make for this occasion. A cake would have been mostly appropriate, but we don’t really need a whole cake for ourselves over here. I considered making small cakes or cupcakes, but I also wanted something quick and easy. Then I saw these beautiful marshmallow pictures and I knew they were just what I was looking for (though my pictures are not as good obvs, I still need to do something about those shadows).

Plus I had been eyeing these cake batter marshmallows for a while. So last night I came back home at about 9 pm and set out to make the marshmallows. Turns out, I had no corn syrup since I had used it all up on the chocolate-coconut marbled nougat for the Daring Bakers challenge. 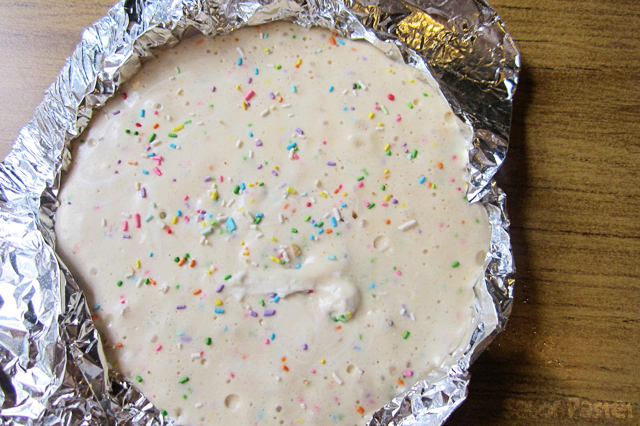 At this point you may be wondering where my nougat is. I didn’t post it because it didn’t turn out right. I mean, it wasn’t terrible but I didn’t like it. I’m usually not a fan of honey nougat but this one was too hard and chewy, even for my family’s taste. Probably my fault since I didn’t have enough honey and I also didn’t have enough corn syrup in the first place. It was still fun to make though (and really messy: imagine chocolate oozing out while you struggle cutting the bars with scissors).

So, I panicked a little at first, but then Google and The Clever Carrot came to the rescue. Turns out you can make marshmallows replacing the corn syrup with… evaporated milk. It was also a signal from above that I happened to have a can of the stuff in my pantry, since evaporated milk is not a thing here. For the record you can also make marshmallows with more sugar instead of the corn syrup, but these were much more fun.

I used this recipe, with the addition of 6 tbsp cake mix and 2 tbsp sprinkles. For that amount anyway, since I actually had to halve the recipe because I also didn’t have a lot of gelatin (so yes, I really need to stock my pantry, but did you know a 6 inch round pan is the exact half of a square 8 inch pan?)

Anyway, I’ve rambled enough but I wanted to say thank you to everyone who has been visiting the blog and commenting (and featuring my posts!) It really means a lot to me :)

So thanks! And brace yourselves, I have leftover evaporated milk so more tres leches is coming!