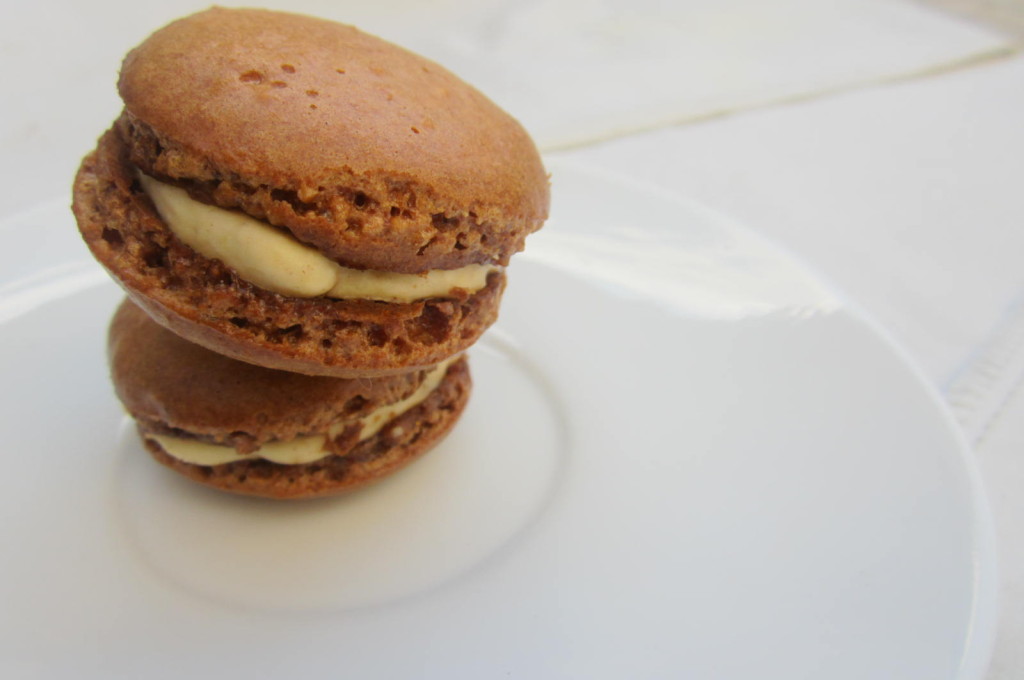 Hi guys! I hope you’re not over gingerbread yet, cause I have one more recipe for you. It’s gingerbread macarons with eggnog filling. I think this is the 5th time I’ve made macarons, and I’m glad to say they’ve finally turned out right :) (or at least, they look and taste good!)

I used Pierre Hermé’s recipe, which doesn’t use granulated sugar. I thought it was unusual but it does make the process a little easier, plus the granulated sugar is not really necessary since it only helps prevent overbeating of the egg whites. I also followed his recommendation of using 2/3 aged whites, but only cause I had leftovers from some yummy old-fashioned chocolate glazed donuts (those will be coming soon!) 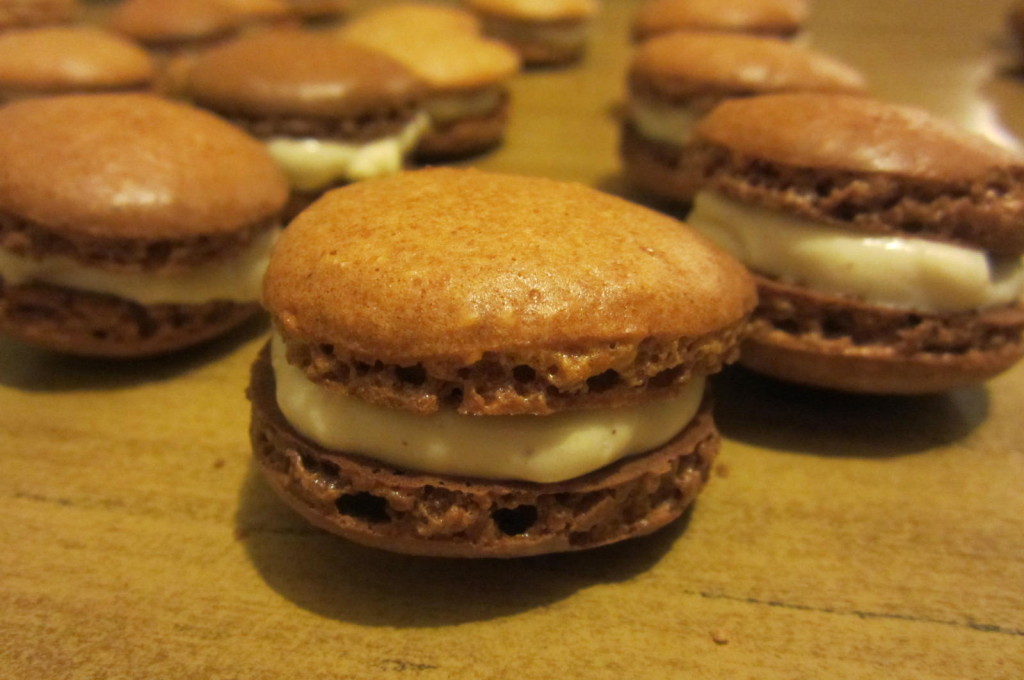 I added just a bit of molasses to the egg whites to help achieve the gingerbread flavor, and then I added lots of spices to the almond-sugar mix.

For the filling, I was going to make a simple chocolate ganache at first, but I couldn’t help going with the eggnog diplomat cream. It’s Christmassy and it helps me get rid of those pesky yolks. I like using this kind of cold fillings (as opposed to buttercream, for instance) because then I can walk by the fridge and pop a macaron.

The downside about diplomat cream though, is that it’s very moist so the macarons won’t last too long. You should try to eat them on day 2, 3 at the most. 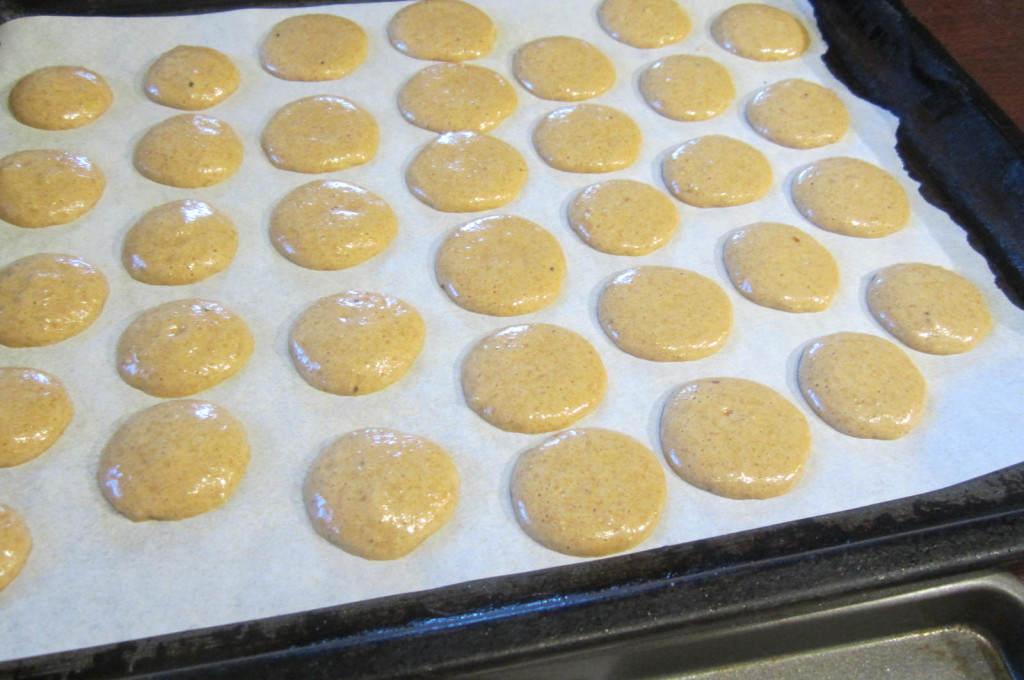 I think my main issue with macarons has always been the baking. My previous batch had finally developed feet, but as usual I baked them for the recommended time and they broke to pieces when I tried to take them out of the parchment. So this time I decided to just bake them longer and save me the stress. They were crispy, but it’s nothing a creamy filling can’t fix.

Oh, and it’s also worth noting that the first ones that went into the oven ended up with no feet at all. So either the oven wasn’t hot enough, or they hadn’t rested long enough. They were still good though :P 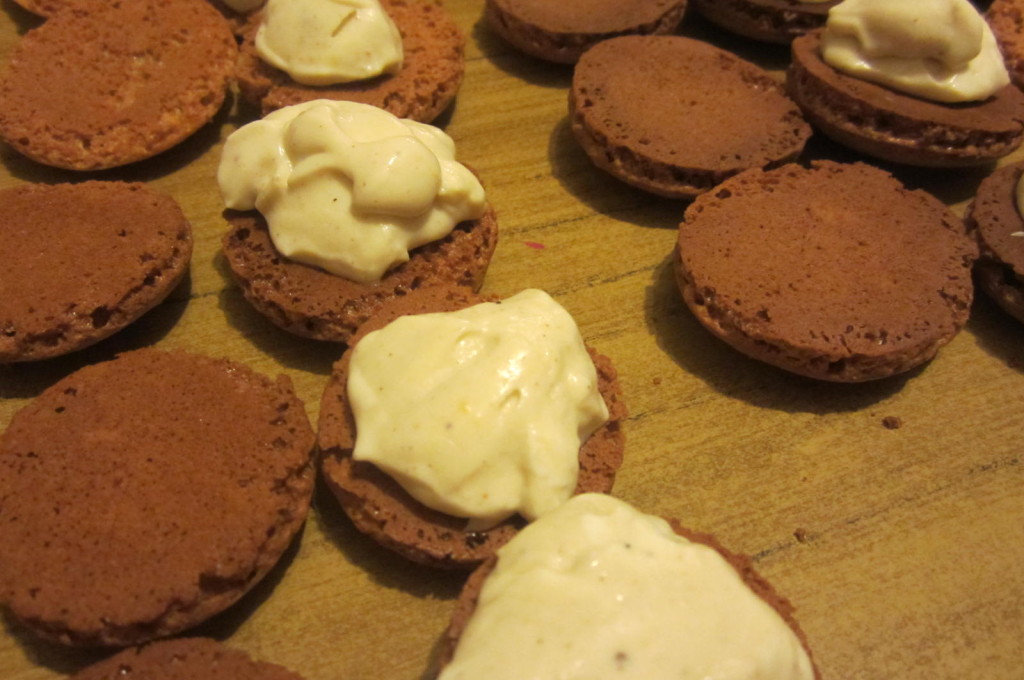 I also tried something new on the filling, which was cooling down the pastry cream on the stand mixer (with the paddle attachment on medium speed). I thought it would work better cause the pastry cream sets too solid on the fridge and it can be a little hard to fold in the whipped cream. I’m not sure it would work on larger volumes but it worked great for me, and it was faster too!

Anyway, these macarons were so good, you should totally give them a try. If you don’t want to bother with the filling, you can make a regular ganache, or a white one with eggnog and white chocolate. I’m sure they’ll be amazing either way :) 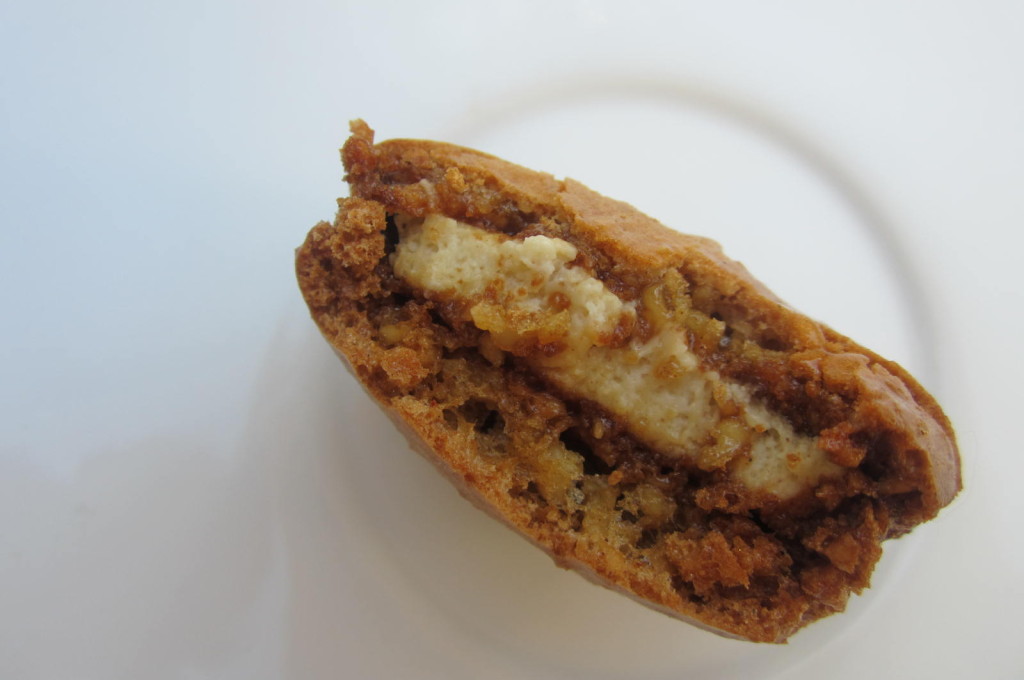 1. Preheat the oven to 340ºF.
2. Sift together the almond flour, powdered sugar, and spices. Mix thoroughly.
3. Beat the egg whites and the molasses until light and foamy.
4. Gently fold the almond mixture into the whipped egg whites.
5. Fill a piping bag fitted with a round, 1/2 in tip. Form the macarons into a baking sheet that has been layered with parchment and covered in cooking spray.
6. Let the piped batter rest until they are no longer sticky to the touch, 30 minutes to 1 hour (make sure to leave them in a place with good air circulation).
7. Bake the macarons for 15 to 20 minutes.

1. In a saucepan, mix the egg yolks, cornstarch, and half of the sugar.
2. Mix the milk with other half of the sugar, the cinnamon and the nutmeg; and bring to a boil (I do it in the microwave).
3. Pour the boiling milk into the egg yolks while whisking constantly. While still whisking, cook over medium heat until the mixture boils. Mix in the rum and vanilla extract.
4. Transfer the pastry cream to a stand mixer fitted with the paddle attachment, and beat on medium speed until cool, about 10 minutes.
5. Fold in the whipped cream.