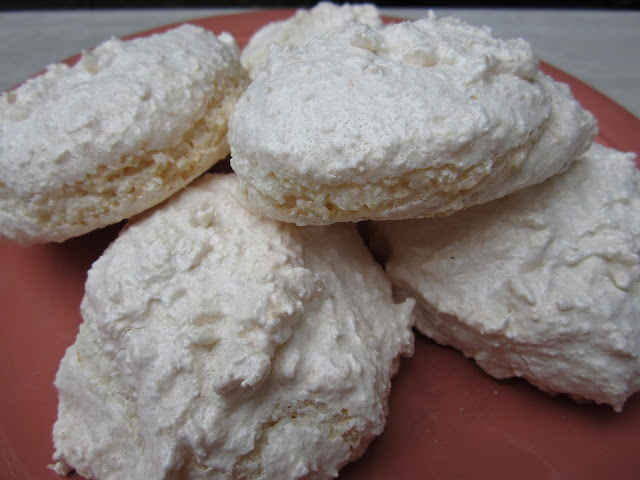 Last Sunday was father’s day over here and we made breakfast for dad. I say we cause I do have a sister, although I made most of the work (although she agreed to pay for her share of the gift I guess).

The breakfast had coffee, orange juice, orange muffins, an alfajor and alfajorcitos, chocolate truffles as seen on Scientifically Sweet, bread with cream cheese, and cocadas.

Cocadas are one of my dad’s favorites so I make them often. I know coconut can be a love it or hate it thing, but if you’re a coconut fan, you’ll love these. They’re super coconutty like macaroons, but they egg whites are whipped which technically makes them coconut meringues. 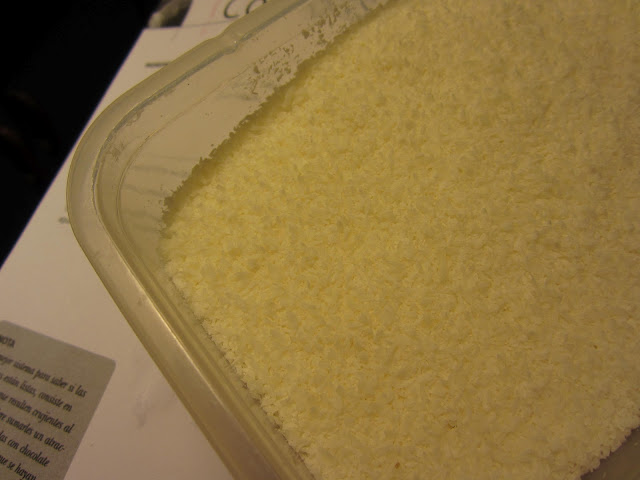 The recipe is really easy (with only 3 ingredients), but there are some things you should know. First of all, I think it’s important to use finely grated coconut (which is the only kind we have here anyway). If you’re coconut is shredded, you may want to process it for a bit (don’t let it turn into a paste though).

Oh and I’m 90% sure my coconut is unsweetened. If you only have the sweetened one you can reduce the amount of sugar, not too much though. 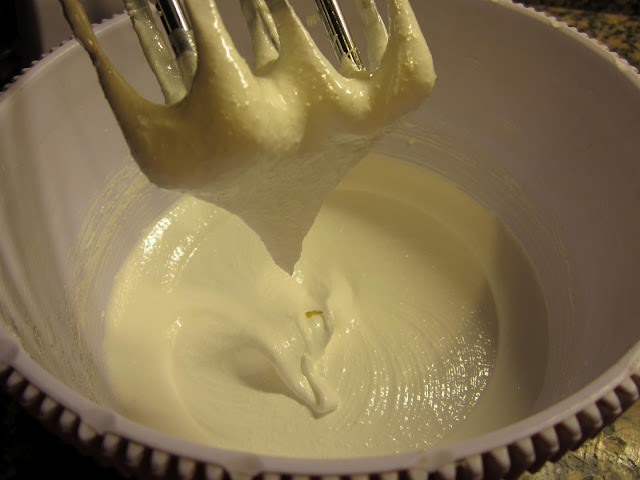 It starts with a French meringue, made by beating the egg whites into soft peaks, then gradually adding the sugar and beating till it’s pretty thick. I won’t be as stiff as Italian or Swiss meringue but it should hold a shape.
Then you fold in the coconut. 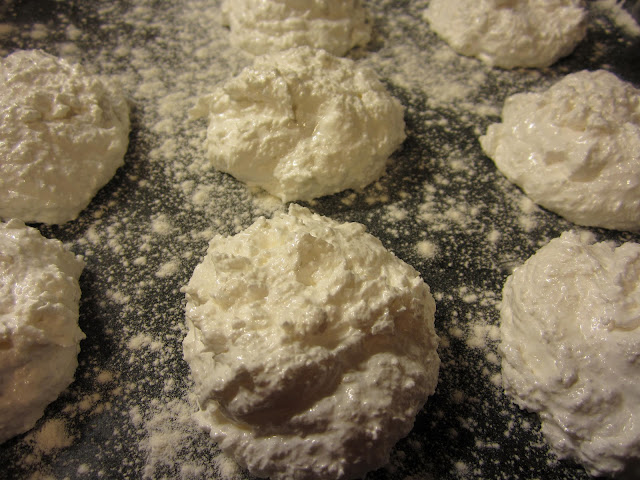 And you drop fat tablespoons onto your baking sheet. Now, the baking time and temperature can be a bit controversial. My recipe says 20 minutes at 250ºF. For starters, that’s a really low temperature and not every oven may reach it. My oven’s lowest seems to be 265, but they were nowhere near ready at 20 minutes (yes they’re probably too big but still).

Anyway, how do you know when they’re ready? Well, they should remain white, except for maybe a light golden color at the bottom. They should be crispy on the outside and softer on the inside, but not as soft as a chocolate chip cookie. When they’re done, you should be able to carefully pick them up without breaking them. But if one of them does break, then you can check whether the interior is cooked to your taste.

In the end I baked them for 45 minutes. But feel free to try different temperatures and times. 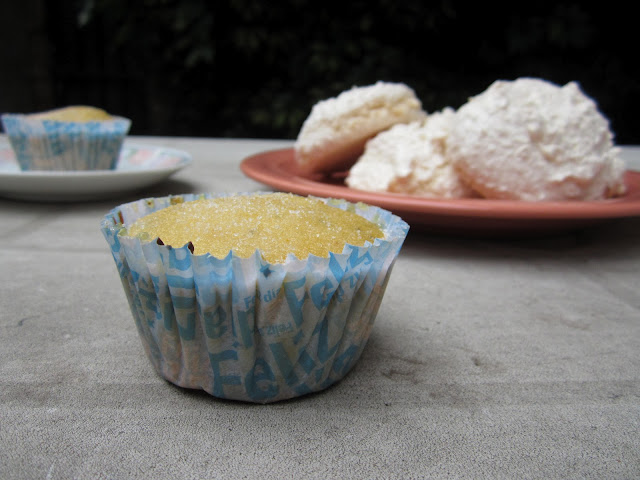 I also made some jam muffins I found at C Mom Cook. I made half the recipe, which yielded 5 muffins. I used all white flour, orange jam, with a tablespoon of poppy seeds and two tablespoons of sugar to make up for the not so sweet jam. I also brushed the tops with more jam and sugar. They were pretty good for a reduced fat muffin. 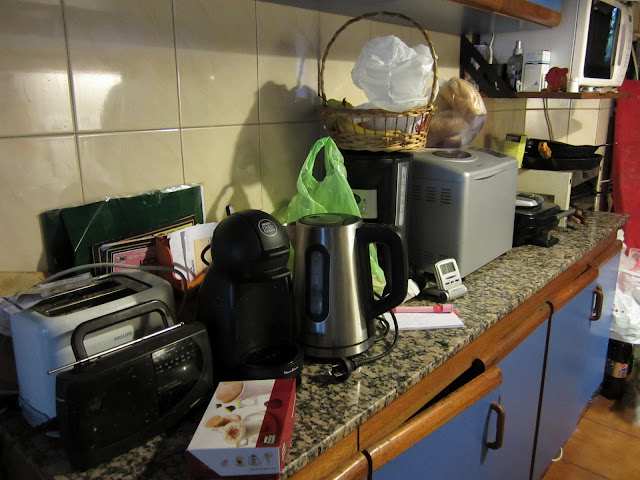 Oh and of course, the breakfast was a cute surprise but we did get him an actual gift: a dolce gusto coffee machine. I love it already and I don’t even drink coffee. And he liked it too ;D
It makes a lot of kinds of coffee as well as tea and chocolate, super fast and with no fuss. I’m eager to get my hands on the chai latte capsules…

The downside is that my countertop is officially full. 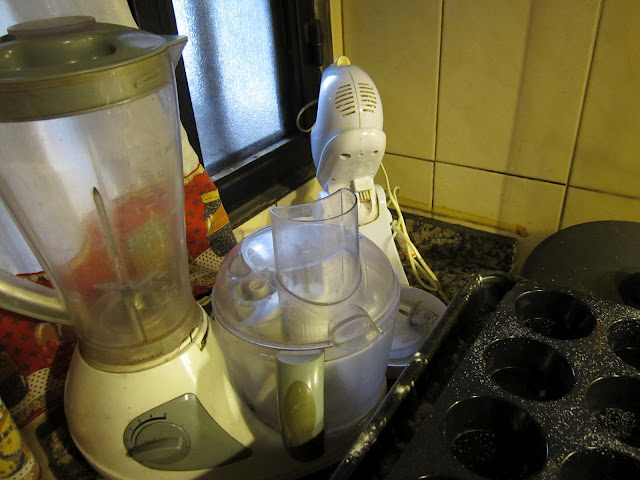 Even though we already moved the food processor and mixer! (they’re beside the stove now, with burnt cords and all). One more appliance and we’ll have to deprecate the fruit basket…

1. Preheat the oven to 265ºF.
2. Beat the egg whites on low speed until soft peaks form. Gradually add the sugar, then continue beating until stiff.
3. Fold in the coconut in 3 additions.
4. Lightly flour a baking sheet. Using two tablespoons, place drops of the mix into the sheet, separated by one inch. Even out the surface with the back of the spoon.
5. Bake for 40 to 45 minutes.
6. Cool completely and store in an airtight container for up to 5 days.