My first Daring Bakers challenge has been pretty exciting. I made two traditional Armenian recipes: nutmeg cake and nazook. They’re two unique recipes, great if you’re looking for something different. Let’s have a look a the cake first:

I wasn’t too excited about the nutmeg cake at first. I know that nutmeg is a sweet spice, but over here, it’s only used on bechamel (and sometimes mashed potatoes). I wish I was exaggerating. So the thought of a nutmeg cake was weird, to say the least. I could have replaced it with cinnamon but I wanted to try the real deal, you know.

But then again, this cake has a crust. Yeah, really.

It’s basically a flour, sugar and butter crumble mix; you press half of it onto the pan and then add eggs and milk to the rest to turn it into a batter. Then you sprinkle it with nuts and bake it.

Everything was fine until then (except for my food processor not working as expected, but I could do without it). But I decided I’d try my new over thermometer, and it turned out my preheated oven was 30ºC off! So not cool. How could I have been baking all this time with that temperature offset? Then I remembered: I purposefully set my oven one mark hotter than indicated, because of one ruined cupcake batch when I just got it, that I’d rather not talk about (but I can say they were peanut butter ganache filled cupcakes from one of my favorite pastry chefs Osvaldo Gross). After that I figured the marks in the oven were wrong and I moved on.

But since it they seemed to match the thermometer, I thought I’d give the right mark a chance. It clearly didn’t work out. When I checked the cake at 30 minutes, it was far from done, and the thermometer read 150 instead of 180.

Apparently the temperature goes down after a while or something, I still have to look into it…

And what did I get after 60 minutes? It may have been worth the oven mishaps. Instead of a coffee cake, it turned out more like a giant nutmeg blondie. It was dense but good, and the nutmeg wasn’t so bad really (I used fresh nutmeg). The downfall was that the crust wasn’t really crusty.

And here’s the second part of the challenge, the nazook. It’s also a very interesting confection. 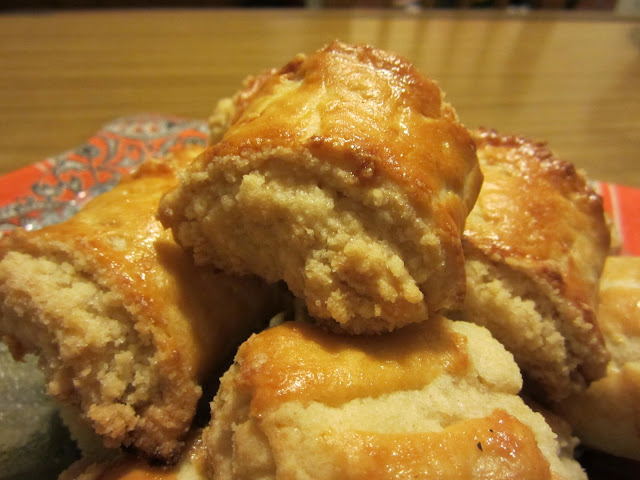 Although the dough has yeast, it’s not bread like at all. It has no salt, sugar, water or eggs: just flour, yeast, butter and cream. It doesn’t even rise much (possibly because of the lack of sugar). So while they may seem like a relative of cinnamon rolls and the like, they’re actually like buttery cookies. 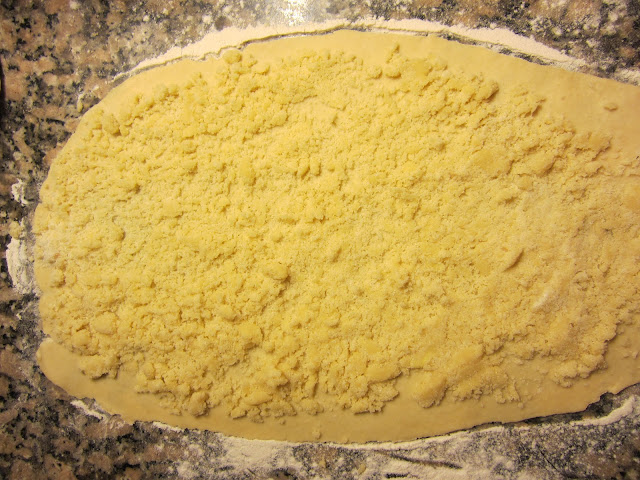 The dough was really easy to work with and it also smelled much nicer than a regular yeast dough, if it matters to anyone. I made the traditional vanilla filling but I’m sure any flavor would be good. 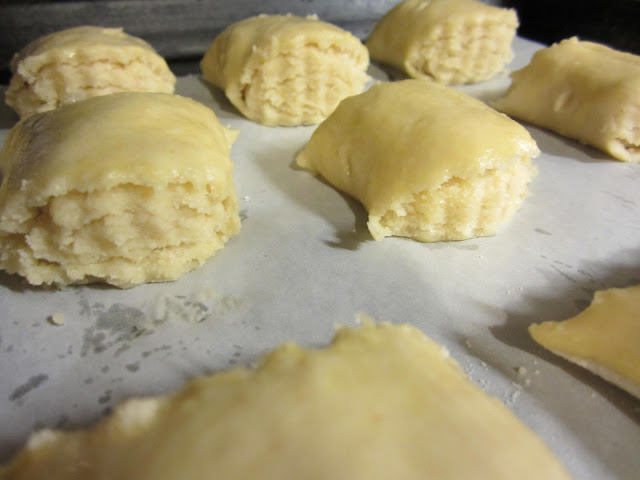 Then I cut the pieces with a crinkle cutter as specified, it gives them a pretty cool look as you can see. My cutter was round so they had a bit of a half moon shape but it wasn’t really noticeable after baking. I also cut 8 from each rope instead of 10 cause I was afraid they’d be too small. 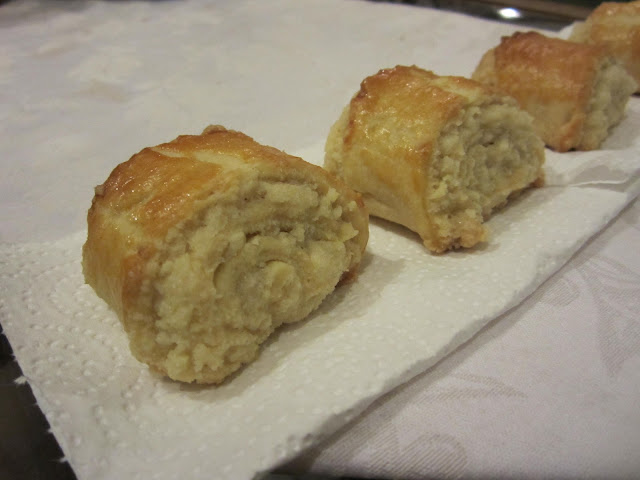 I’m really happy with the Daring Bakers so far, it’s a great way to try new recipes you wouldn’t normally try, especially these kind of cultural recipes you don’t even know about!

Just so you know, I made half of the nazook and 3/4 of the cake on a 20cm pan (8″), which was the actual proportion. Yes, I calculate the surface of my pans, thank you.

Recipe from Jason at the Daring Bakers
Yield: one 9″ cake

1. Preheat your oven to 350°F.
2. Mix the baking soda into the milk. Set aside.
3. Put the flour, baking powder, and the brown sugar into your food processor. Pulse until uniformly mixed.
4. Toss in the cubed butter. Pulse until uniformly mixed into tan-colored crumbs.
5. Pour half of the crumbs into your springform pan. Press out a crust using your fingers and knuckles.
6. Crack the egg into the food processor with the rest of the crumbs still in it.
7. Grate 1 to 1-1/2 teaspoon of nutmeg. Toss that into the food processor, too. Pulse until well-incorporated.
8. Pour in the milk and baking soda mixture. Continue to mix until a slightly lumpy tan batter is formed.
9. Pour the batter over the crust in the springform pan.
10. Gently sprinkle the walnut pieces over the batter.
11. Bake in a preheated moderate oven for 30-40 minutes. It’s ready when the top is golden brown, and when a toothpick inserted in the center comes out clean.

Recipe from Jason at the Daring Bakers
Yield: 32 to 40 pieces

Make the Pastry Dough
1. Place the sifted flour into a large bowl.
2. Add the dry yeast, and mix it in.
3. Add the sour cream, and the softened butter.
4. Use your hands, or a standing mixer with a paddle attachment, to work it into a dough.
5. If using a standing mixer, switch to a dough hook. If making manually, continue to knead for about 10 minutes, or until the dough no longer sticks to the bowl or your hands. If it remains very sticky, add some flour, a little at a time.
6. Cover the dough and refrigerate for 3-5 hours, or overnight if you like.

Make the filling
7. Mix the flour, sugar, and the softened butter in a medium bowl.
8. Add the vanilla extract.
9. Mix the filling until it looks like clumpy, damp sand. It should not take long. Set aside.

Make the nazook
10. Preheat the oven to moderate 350°F.
11. Cut the refrigerated dough into quarters.
12. Form one of the quarters into a ball. Dust your working surface with a little flour.
13. Roll out the dough into a large rectangle or oval. The dough should be thin, but not transparent.
14. Spread 1/4 of the filling mixture across the rolled-out dough in an even layer. Try to spread the filling as close as possible to the edges on the short sides, but keep some of pastry dough uncovered (1″) along the long edges.
15. From one of the long sides, start slowly rolling the dough across. Be careful to make sure the filling stays evenly distributed. Roll all the way across until you have a long, thin loaf.
16. Pat down the loaf with your palm and fingers so that it flattens out a bit.
17. Apply the egg wash with a pastry brush.
18. Use a crinkle cutter (or knife) to cut the loaf into 10 equally-sized pieces. Put onto an ungreased cookie sheet (I lined it with parchment paper).
19. Place in a preheated moderate oven for about 30 minutes, until the tops are a rich, golden brown.