Can you believe I’m actually posting holiday-related desserts on time? St. Patrick’s day is a great excuse to make this cheesecake, although you may want to make it year-round, because it’s so good. When I saw this recipe for Guinness caramel sauce, I knew at once that I wanted to put it on top of a cheesecake.

The sauce was like sweet, bitter and salty at the same time. It did taste like beer, which I don’t really like, but it worked great on the cheesecake. 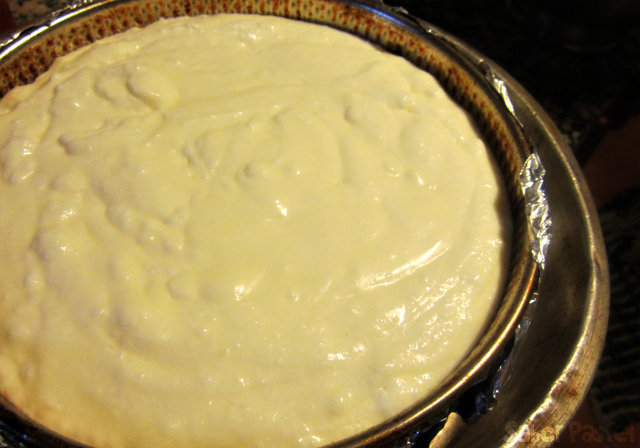 I also used up the chance to work on my cheesecake skills. I don’t bake a lot of cheesecakes since I prefer the mousse type (although I don’t have a recipe up yet, must correct that!) But lately I’ve seen a lot of amazing recipes online (such as this bourbon banana pudding cheesecake that was so good) and I guess the cheesecake baking bug hit me. What I don’t like about baked cheesecakes is that they can be a little dense, so I made sure this one wouldn’t be the case.

I know most people try not to incorporate a lot of air into their cheesecakes to prevent cracking (which happens when the cheesecake rises in the oven and then collapses, like a souffle). I went the opposite way and whipped the cheese, whipped the egg whites, and whipped the cream. To my surprise the cake didn’t rise or crack at all, in fact it shrunk a bit as you can see. But it was so creamy and light :) 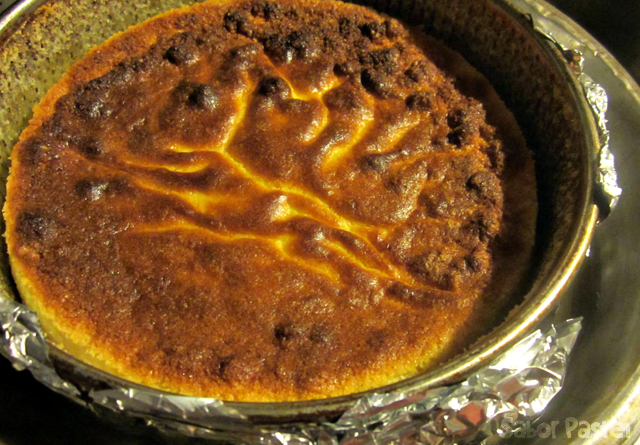 My cake was a little underdone in the middle so I had trouble getting a neat slice. I came back home after lunch at my grandma’s with about half of the cake, then at night I place the remaining 1/3 in the freezer, to try and get a clean slice and some good shots in the morning.   Well, it didn’t happen cause the cake was gone when I woke up. I told my mom, ‘didn’t you know I was going to take pictures?’, and she was like ‘ah, I wondered why you had placed the cake in the freezer’. It was that good. 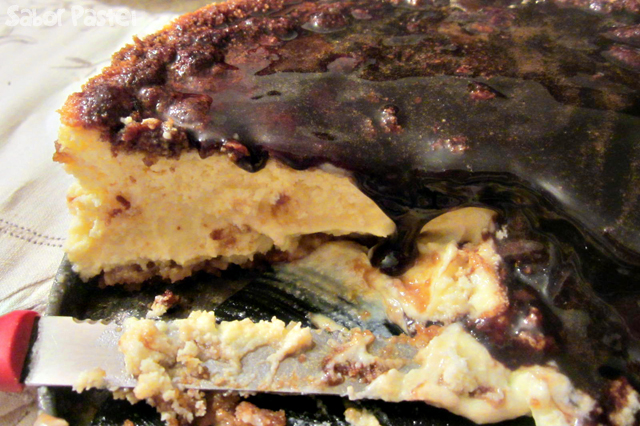 1. Grind the cookies in a food processor, until they turn into a fine crumb. Add the melted butter and pulse until incorporated.
2. Spray an 8 in springform pan with baking spray, and press the cookie crumbs tightly on the bottom. Refrigerate the crust while you make the cheesecake batter.

1. Preheat the oven to 350ºF.
2. Pour the cream in a medium bowl and beat it until it forms soft peaks. Reserve
3. Pour the egg whites in a large bowl and beat them until they form soft peaks. Reserve
4. In a stand mixer with a whisk attachment, beat the cream cheese on medium speed for 3 minutes.
5. Slowly add in the sugar, and mix for another 3 minutes.
6. Add the egg yolks one at a time, mixing for 1 minutes after each addition. Add in the vanilla extract and the salt.
7. Remove the batter from the stand mixer and fold in the whipped cream.
8. Fold in the whipped egg whites, trying not to lose much air.
9. Pour the batter into the prepared pan, and cover the bottom and side of the pan with foil. Place the pan in a deep, slightly bigger pan, and fill it halfway with boiling water. Bake for 60 to 70 minutes, until the edges are set and the center is very slightly jiggly.
10. Turn off the oven and leave the cheesecake to cool for 1 hour. Take the cheesecake out of the oven and refrigerate at least 6 hours, preferably overnight.

1. Mix the stout and brown sugar in a medium pot. Cook at medium heat, stirring often, until the sauce thickens – about 10 minutes.
2. Mix in the salt, maple syrup and vanilla extract.
3. Refrigerate until cool, then distribute on top of the cheesecake.