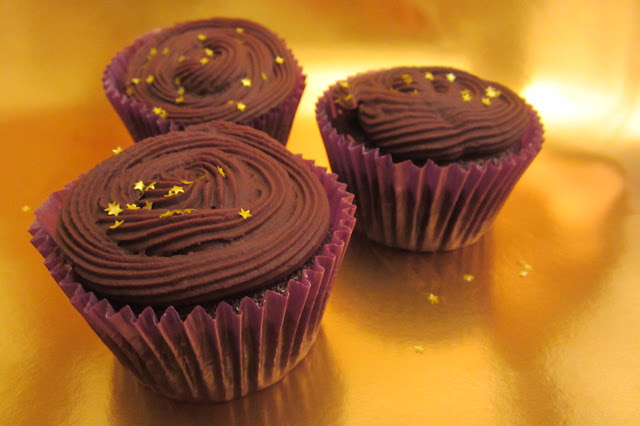 A while ago I had leftover fresh ginger from a cake which was, admittedly, not worth the odd ingredient list. So I wanted to use the remainings on something better. I thought of making ginger in syrup which is a great application but of course, not many people would eat ginger on its own. So I paired it with sweet potatoes. I loooove sweet potatoes. 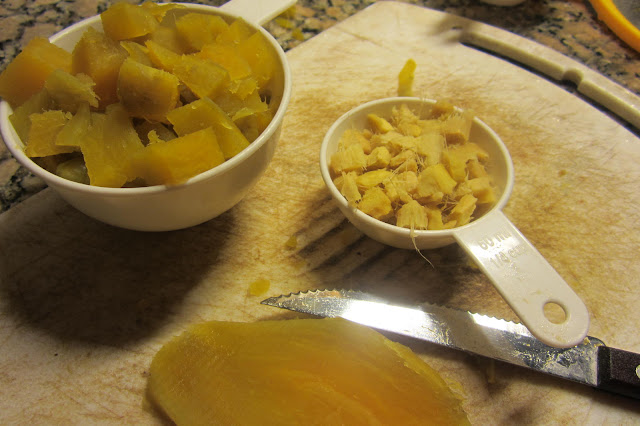 And what to do with sweet potato and ginger in syrup? Fill chocolate cupcakes, duh. You could also fill a cake (or even mix it in the batter), but cupcakes are cuter.
I topped these with a ginger infused ganache, which was pretty much a regular half chocolate/half cream ganache, but I added a piece of ginger to the cream before heating it, and removed it just before frosting the cupcakes. The flavor was subtle but definitely noticeable. 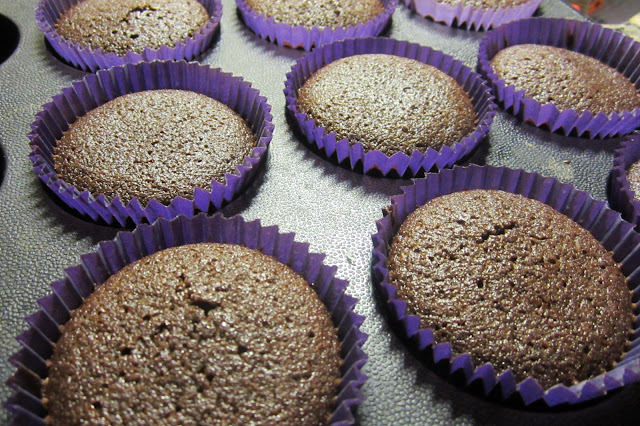 For the cupcakes, I picked a recipe with buttermilk and cocoa (most of the time I’m too lazy to chop and melt chocolate, unless I’m making brownies of course). It also has oil instead of butter, which is usually not my friend, but fortunately these cupcakes turned out mighty fine!
And here’s the filling in case you wanna know what it looked like:

Although it’s got way more sweet potato than ginger, it’s definitely gingery. It’s a flavor that takes some getting used to (doesn’t taste much like ground ginger if you ask me), but if you like it, you’ll love these cupcakes. Either way, these are great if you’re tired of regular chocolate cupcakes!

1. Preheat the oven to 350ºF.
2. Mix the buttermilk, egg, oil and vanilla.
3. Sift together the flour, cocoa and salt; and mix in the sugar.
4. Combine both mixes and beat until smooth, about 2 minutes.
5. Fill cupcake liners and bake for about 25 minutes, until a skewer inserted in the middle of the cupcake comes out clean.

1. Mix the water and sugar in a small saucepan.
2. Cook on low heat until the sugar is dissolved and the syrup has bubbles all over the surface.
3. Add the sweet potato and ginger and keep cooking until the sweet potato is soft but not mushy, and most of the syrup is reduced, about 10 minutes (you’ll want to watch the bottom of the pan on the last minutes).
4. Let cool and fill cupcakes.

1. Boil the cream with the ginger cube.
2. Pour over the chopped chocolate and let stand for 5 minutes.
3. Mix until fully incorporated.
4. Refrigerate until set (at least one hour), then remove the ginger cube and frost cupcakes.