I definitely don’t write as many posts as I would like to. I bake at least two times a week and some things don’t make it to the blog. Some of them wouldn’t have been posted anyway because I didn’t get many pictures or because they were ugly (like the awesome strawberry milk whoopie pies from Sprinkle Bakes that I accidentally turned into strawberry milk shortcakes), but other times I just lack time to post them.

I do get home from work at 5, but the evening goes by in a blink. A lot Some of that time may or may not be spent browsing other blogs.

So I’m gonna tell you about a couple of birthday cakes I’ve made. You must have been thinking I’m some sort of birthday grinch or something, but I do love birthdays. They’re in first grade relation with cake, you know ;)

And since we’re talking about cake, I must bring up the layer cake bible! Of course, I’m talking about Sky High: irresistible triple layer cakes. I know that it’s an old book by today’s standard, but I got it for my birthday this year and I fell in love with it. It’s also my first English cookbook, so that makes it special too. More often than I’d like too, I turn to the internet when looking for a recipe, in spite of having specific books.

But this book is the first place I turn to when looking for a layer cake. In fact, when someone’s birthday is coming, I just ask them to pick a recipe from the book :)

The first one I made was the banana chocolate chip cake, which I loved. The banana cake layers are slightly spiced and packed with chocolate chips. And then the cake is layered with dulce de leche, whipped cream and banana slices. This cake is a must for any banana fans. You can find the recipe here, but add 1 tsp each cinnamon and sweet spice mix (Chinese five-spice powder), as well as 3 tbsp dark rum to the dulce de leche.

The only downfall about it, was that a lot of the dulce leche slided out the cake. It made the decorations slide too so the cake wasn’t that pretty. That’s easily fixed though: just don’t heat the dulce de leche that much.

Other example of this book’s awesomeness, is the chocolate cola cake with coconut pecan caramel frosting. The layers were really moist, and the filling is made with sweetened condensed milk. Is there anything else you need to know?

Ok, I’ll elaborate just in case. While coconut and dulce de leche is an established combination here, I find it way too rich. Yeah, I know. But I promise, it’s probably the only thing I find to be total stomach bomber. Will you forgive me?

While baking sweetened condensed milk in a water bath for 2 hours doesn’t quite turn it into dulce de leche, add toasted coconut and nuts and you got yourself a cake that may not be the best barbacue dessert. But, eaten in moderation, this cake is good. Like, really good. Here‘s the recipe so you can indulge.

For my boyfriend’s birthday, he requested a cake containing all his favorites: bon o bons (which are kind like peanut butter cups, I’ve used them here for instance), nutella, chocolate mousse and mantecol. Mantecol is so hard to explain and I don’t know any equivalents, but it’s some sort of crumbly, melt in your mouth peanut fudge.

I used this recipe for the cake, and added chopped up bon o bons in the batter. Then I filled it with chocolate mouse, the same amount found here. I can share a little tip that I use on most layer cakes, but it’s especially useful with mousse and other airy fillings. When spreading the filling and stacking the layers, I place them inside a springform pan of the same size, with the bottom taken out. That way I make sure all the layers are in the same place, and the filling doesn’t come out of the sides. I usually leave it like that in the fridge for a while so that it sets.

Anyway, after filling the cake with mousse and mantecol, I covered it with nutella ganache made with 9 oz nutella and 5.5 oz cream. The ganache got me wondering, why is it darker than nutella if it’s just nutella and cream which is well, white? But the most important thing is, it was good.

And the last cake for today, a salted caramel chocolate stout cake. I had made these and ended up with leftover caramel and buttercream, so I just made more buttercream for the filling (and swissed it up, of course). You can use the recipe here as a base, although you’ll need at least 1.5 of that for a whole cake. For the record, you can add less butter to the meringue since there’s some fat in the caramel as well. Just give it a try, and you can add more butter later if it doesn’t come together at first.

The cake was found here. Although she makes a four layer cake, I was unsure it would be enough, judging by the ingredients. But I also didn’t want more than two sticks of butter on the cake, so I went with it and got 3 nice layers, although a little thinner than the ones above. I brushed the layers with more stout, since being boozy was the only condition my aunt’s cake had to meet (although, as usual, I didn’t quite make it. I guess I’m stingy when it comes to alcohol in my cakes).

Finally, I covered the cake in the ubiquitous ganache. And veredict is, this cake was also a goodie. You don’t quite taste the stout, but the salted caramel and chocolate combo is always welcome. 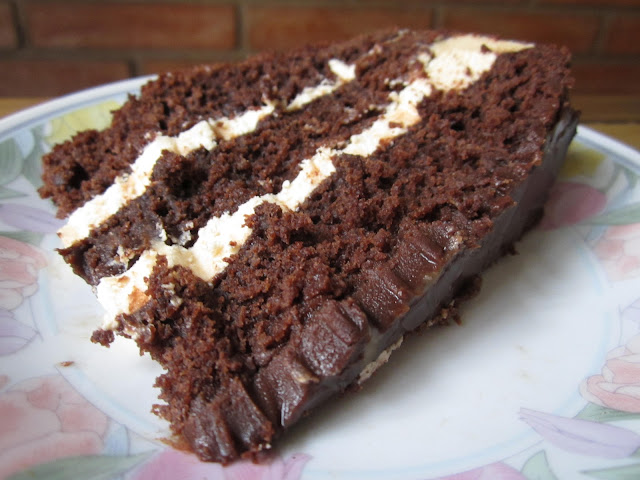 That’s all folks, now go make some layer cakes! Don’t wait until the next birthday! You can always make a small cake, if you don’t want to gorge a 9″ confection by yourself :)

One thought on “Layer cakes galore!”