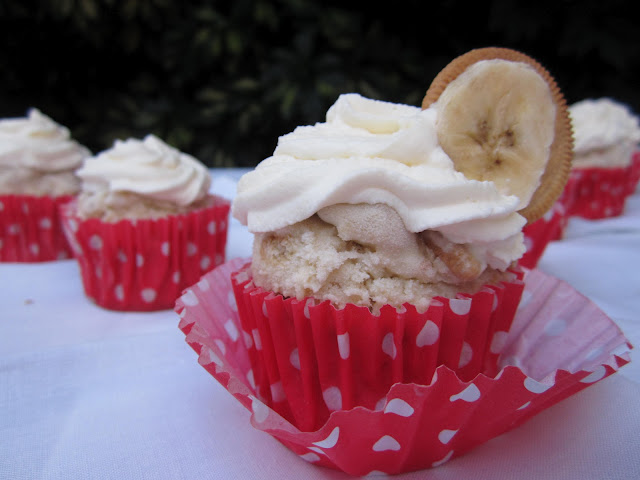 I had never made (or had) ice cream cupcakes before. So when I heard about the 2012 ice cream cupcake contest, hosted by Cupcake Project and Scoopalicious, I thought it was the perfect chance to try them. I chose one of my favorite ice cream flavors (and desserts, too): banana pudding.

I started with plain ice cream made from a custard. Then I added banana slices and let it sit overnight, so that the ice cream would get super banana-y. On the following day I processed it just a bit and then churned it, mixing in cookies at the end. I’m glad I finally found a use for golden oreos :P Take out the cream and they make a fine banana pudding cookie. Of course, you may use the traditional Nilla wafers if available. 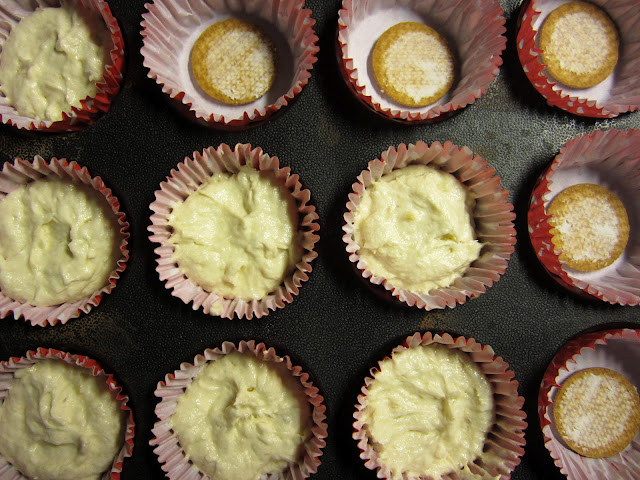 Then I made some banana cupcakes, with a cookie on the bottom just for good measure. The batter doesn’t have any extracts or spices so these cupcakes are full of clear banana flavor. They’re also really tender and moist.

The cupcakes will have ice cream on top, so the liners shouldn’t be filled more than halfway, or closer to 1/3 if you dare (I know it’s hard!).

The good thing about it is that I had enough leftover batter for 5 cupcakes, which I topped with cinnamon and brown sugar. It’s always nice to have a little treat to preview the final product and fill you with energy and potassium for the next step :) 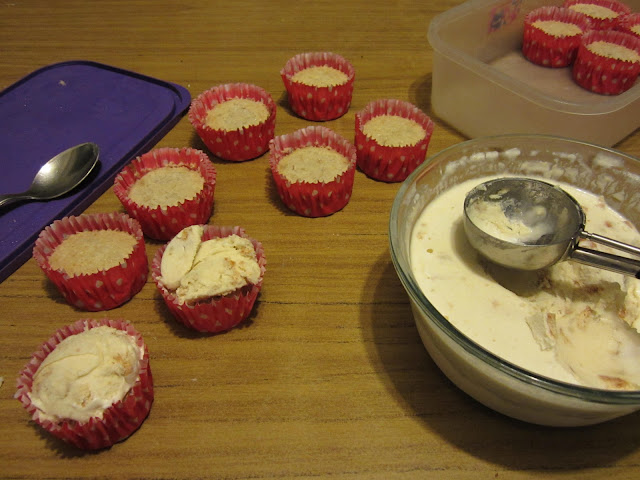 Anyway, when the cupcakes where done, I let them cool and froze them for about an hour. Then I placed big scoops of ice cream on top of them, and evened them out with my hands (although the back of a spoon would have been a fine choice too, especially considering it’s winter here and my fingers were freezing). 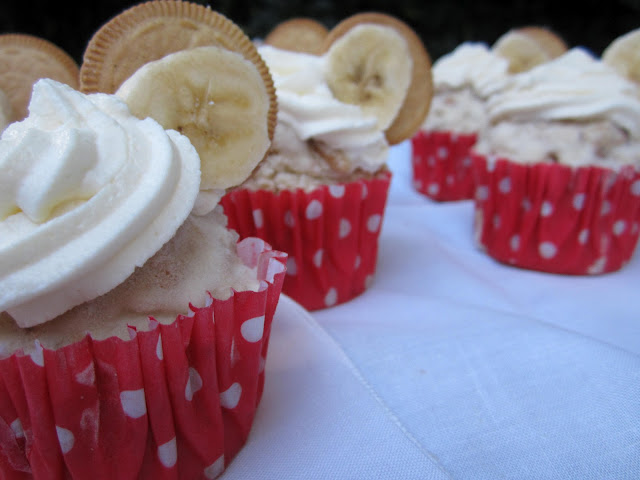 When they were done and thoroughly frozen, I decorated them with whipped cream, banana slices and more cookies.

Just like regular banana pudding, this cupcakes are fresh but still so flavorful. They make a great end to a copious meal. And by making this iced version, you can make sure to always have them around for an emergency cupcake fix ;D 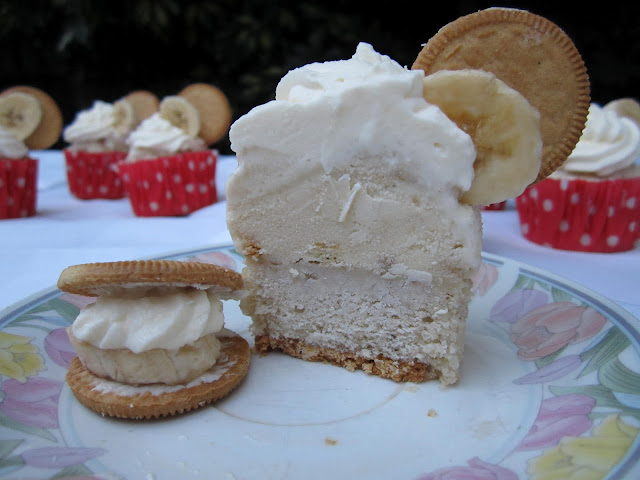 For the ice cream:

sweetened whipped cream
banana slices
vanilla cookies
1. To make the ice cream, mix the cream and the milk and bring to a boil (either on the stove or the microwave).
2. Place the yolks and sugar in a pot, and whip lightly. Pour the boiling cream and milk over them, whisking constantly.
3. Cook over low heat, stirring the whole time, until the mixture reaches 180ºF. The custard will thicken and cover the sides of the pan and the back of the spoon (it shouldn’t take longer than 10 minutes).
4. Take off the heat and let come to room temperature.
5. Mix in sliced bananas, then cover with film on contact and refrigerate overnight.
6. Place the custard in a food processor, and pulse just a couple times, so that the mix is smoother but some small banana chunks remain.
7. Churn in an ice cream maker, adding the chopped cookies when the ice cream is almost done (mine took 15 minutes). Freeze overnight (if you don’t have an ice cream maker, you can freeze the custard and whip it once or twice every couple hours).
8. To make the cupcakes, preheat the oven to 350ºF.
9. Line a cupcake pan and place a cookie at the bottom of each liner.
10. Mix the flour, baking powder and salt thoroughly.
11. Mash the bananas until smooth, adding a few drops of lemon juice if desired, to prevent them from browning.
12. Beat the butter and sugar together for a couple minutes, until they are light and fluffy.
13. Beat in the egg until incorporated.
14. Add the banana puree and beat until smooth.
15. Mix in the sifted flour mixture in three additions, alternating with the milk so that the flour is added first and last.
16. Fill the liners halfway with batter, and bake for 20 minutes, until a toothpick inserted in the middle of the cupcake comes out clean.
17. Let cool and freeze for at least one hour.
18. Let the ice cream sit out of the freezer for at least 15 minutes so that it gets softer. Place scoops of ice cream on top of the cupcakes, evening out the top with your hands or the back of the spoon. They should resemble a domed cupcake. Freeze for at least 2 hours, or overnight if desired.
19. Frost the cupcakes with sweetened whipped cream, and decorate with cookies and banana slices.
20. Keep frozen in an airtight container, and take out of the freezer at least 15 minutes before serving.